‘Focus on the things you can control’: how to cope with radical uncertainty

We aren’t as powerless as the coronavirus pandemic makes us feel. This is how to stay calm, one Post-it at a time 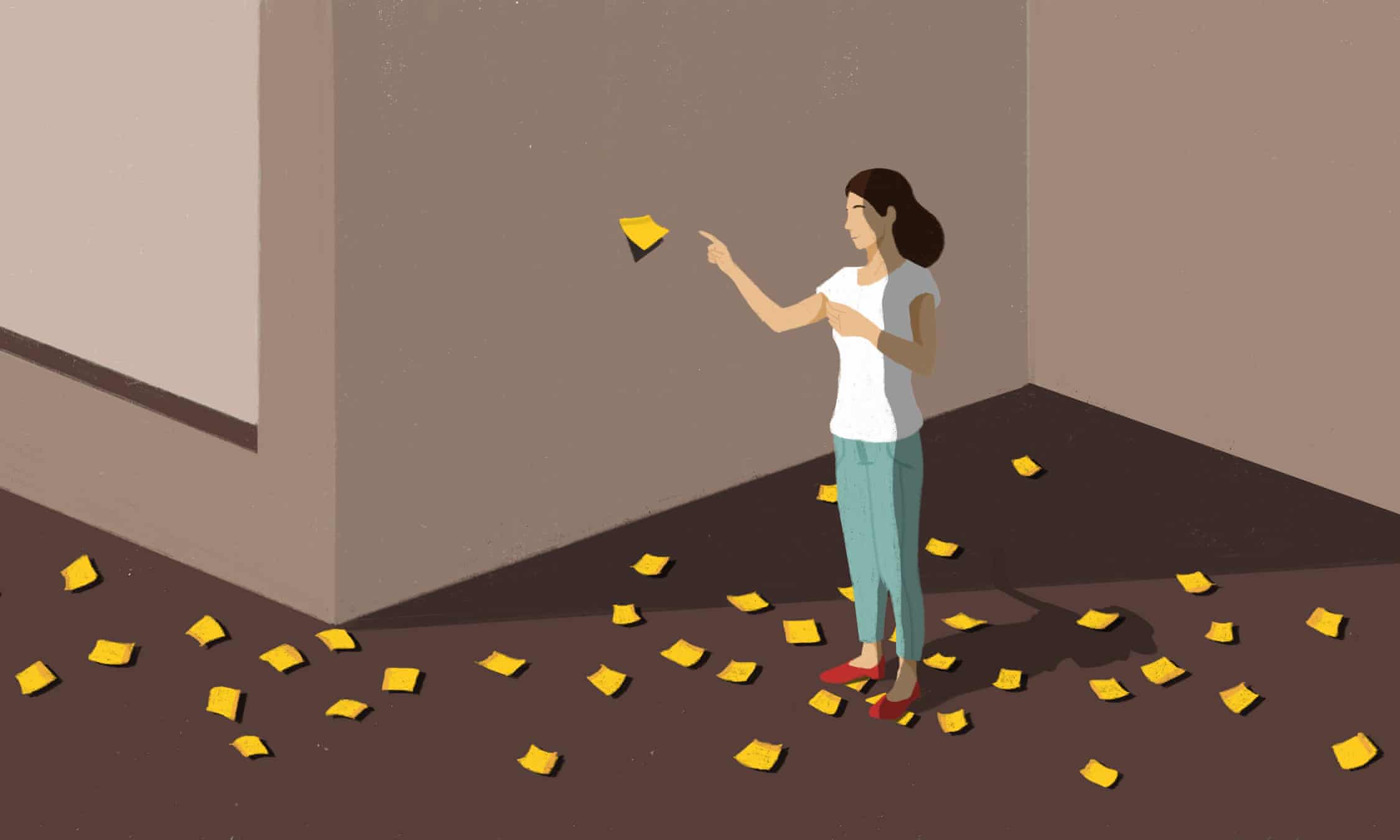 In 1939, in a sermon preached at Oxford University in the midst of a different global crisis, CS Lewis made a distinction that’s worth revisiting today. It wasn’t the case, he pointed out, that the outbreak of war had rendered human life suddenly fragile; rather, it was that people were suddenly realising it always had been. “The war creates no absolutely new situation,” Lewis said. “It simply aggravates the permanent human situation so that we can no longer ignore it. Human life has always been lived on the edge of a precipice… We are mistaken when we compare war with ‘normal life’. Life has never been normal.”

In this time of acute collective anxiety, this sort of insight might not bring much peace of mind on its own. But it is a crucial first step, because it suggests that something about our gut-churning feelings of helplessness – the sense that we’re facing an absolutely horrible, unprecedented emergency, which we’ll surely lack the personal resilience to cope with – isn’t wholly accurate. And it implies that we might be much better than we think at dealing with radical uncertainty – because in fact, every hour of every day, we already do.

The special trouble with uncertainty is that it’s a doorway to infinity. When you’ve no idea what tomorrow will bring, it’s easy to fill that gap with fantasy, and the world of fantasy knows no bounds. It’s possible to imagine things getting limitlessly bad. (Most of us are vulnerable to what the psychotherapist Bruce Tift calls “annihilatory panic”: the unconscious belief that there are certain feelings that would literally destroy us if we had to feel them.) Unsurprisingly, this feeds the destructive and self-perpetuating thought pattern that cognitive therapists call “catastrophising”: taking every morsel of bad news as evidence that things are going to be globally, absolutely and eternally terrible. By contrast, when even extremely bad things happen, the situation, however dire, remains finite. An event occurs; it’s over; then the people directly affected can begin to reconfigure their lives.

One overarching strategy for dealing with the experience of intense uncertainty is to do whatever you can to bring yourself back to the world of the finite – to things as they actually are in your own concrete world, and the concrete things you can control. As a first step, try not to see anxious feelings as something you’ve got to get rid of. Lisa Marchiano, a therapist and writer based in Philadelphia, suggests making it your mission “to tolerate uncertainty, rather than having to make it go away. That creates a different frame for thinking about things: all you have to do is tolerate it. Of course, that may be very difficult – but it can get us out of this place where we’re spinning our wheels, trying to fix something it isn’t within our power to fix.”

Many of the most fruitful techniques for coping with uncertainty involve a similar move: they are ways to refocus your attention away from your runaway fantasies. If you’re confined to your home at the moment, giving yourself some structure by drawing up an approximate schedule can reconnect you to the texture of the day. (“Even if we hate our jobs, having somewhere to be at 9am is very containing, psychologically,” Marchiano says.) You’ll get a related “grounding” effect by returning to the body through virtually any form of physical exercise. (As a specific antidote to anxious feelings, I highly recommend the “shaking practice” demonstrated by the coach Deepika Sheleff on her website, which is what it sounds like – and has the added benefit of being so ridiculous as to be incompatible with total misery.)

There’s no harm in a little distraction, if you can manage it. But one of the most intriguing insights of Buddhist psychology is that focusing on discomfort is even more effective. In another demonstration of the power of returning to concrete reality, if you spend a few moments paying attention as closely as possible to the physical sensations you’re experiencing at this very moment, you’ll probably find them much easier to tolerate. The meditation teacher Kenneth Folk frames this as a matter of “attentional bandwidth”: your capacity to pay attention is strictly limited – and so the more of it you manage to dedicate to the experience you’re having, the less remains available for dwelling on how unpleasant it is. (Complement this with the powerfully calming 4-7-8 breathing technique: breathe in through your nose for a count of four, hold your breath for a count of seven, then exhale through your mouth, emptying the lungs as fully as possible, for a count of eight.)

Meanwhile, as your to-do list isn’t going anywhere – depending on your situation, it may just have become unfeasibly longer – you’ll need a way to get things done in the presence of uncertainty, and here, too, a short-range, down-to-earth, finitude-focused approach is likely to the most effective. Even at the best of times, it’s a good idea to limit the number of tasks you’re working on at any given moment to three or four, seeing them through to completion before embarking on others; and in times of high stress, it may be worth reducing that limit to one. Pick a task, write it on a Post-it, position it somewhere prominent, then do that task; for that moment, it’s the only goal you need to worry about accomplishing. Then repeat. Soon, you’ll accumulate a pleasing number of Post-its, a testament to all the constructive stuff you’ve managed to get done.

As the anxiety abates a little, it may even become possible to glimpse the profound truth that, as Marchiano puts it, “a crisis can heighten the opportunity to find meaning, to get clear about what matters most”. What’s your role here? There’s solace to be found in figuring out what this moment demands from you, then doing it as well as you can. It may not look like anything heroic from the outside. (“Maybe it’s just making sure the kids stay on top of their schoolwork, or doing your job as a clerk in a grocery store,” Marchiano says.) It won’t change the fact that nobody knows what tomorrow holds. But, then again, nobody has ever known what tomorrow held – yet life has always gone on, including its most uplifting forms. As Lewis said: “If men had postponed the search for knowledge and beauty until they were secure, the search would never have begun.”