Back in 2013, ProPublica detailed what seemed a stunning development in the pharmaceutical industry’s drive to win the prescription pads of the nation’s doctors: In just four years, one doctor had earned $1 million giving promotional talks and consulting for drug companies; 21 others had made more than $500,000.

More than 2,500 physicians have received at least half a million dollars apiece from drugmakers and medical device companies in the past five years alone, a new ProPublica analysis of payment data shows. And that doesn’t include money for research or royalties from inventions.

More than 700 of those doctors received at least $1 million.

“Holy smokes,” said Dr. Walid Gellad, an associate professor of medicine and health policy at the University of Pittsburgh, where he leads the Center for Pharmaceutical Policy and Prescribing. It is “quite striking” how much money doctors were earning from “other activities aside from patient care,” he said.

To identify the latest pharma millionaires and other spending trends, ProPublica analyzed more than 56 million payments made from 2014 to 2018 — the first five full years of the federal Open Payments initiative, which requires companies to publicly disclose the payments as part of the 2010 Affordable Care Act.

Here are the drugs for which pharmaceutical companies spent the most money paying doctors, per year, excluding research and royalty payments. The list does not include payments to teaching hospitals. Data for 2014-2016 is from a prior release of Dollars for Docs and any subsequent updates are not reflected. 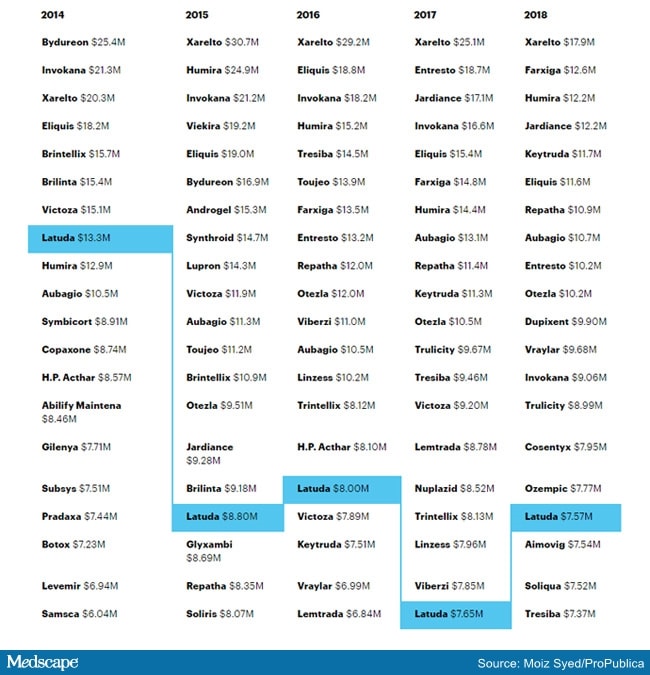 Some academics and physicians predicted that the exposure might cause companies to rethink making payments and doctors to rethink taking them. A flurry of studies matched the payment data with doctors’ prescribing choices and found links between the payments and the products doctors chose.

But ProPublica’s new analysis shows that the public reporting has not dampened the enthusiasm of the drug and medical device industry for having doctors deliver paid dinner talks and sponsored speeches or paying them to consult on products.

In fact, there has been almost no change in how much the industry is spending. Each year from 2014 to 2018, drug and medical device companies spent between $2.1 billion and $2.2 billion paying doctors for speaking and consulting, as well as on meals, travel and gifts for them. (These figures do not include research spending, but they do include royalties.)

Roughly the same number of doctors — more than 600,000 — received payments in any given year.

That consistency, some academics say, is conspicuous.

“It makes me wonder whether patients are using this information or whether physicians are even aware this information is out there,” said Dr. Joseph Ross, a professor of medicine and public health at Yale who has studied pharmaceutical marketing. “It’s almost like it’s not happening.”

Holly Campbell, a spokeswoman for the Pharmaceutical Research and Manufacturers of America, defended company payments to doctors. “It is not necessarily a negative that the numbers have remained generally flat over the past five years,” she wrote in an email. “That statistic appears to be consistent with companies’ belief that their interactions with physicians have been and remain legitimate, even when subjected to sunshine.”

ProPublica first delved into the world of drug company promotional campaigns in 2010 when it gathered the payments made by seven companies that were required to make them public as part of settlements in whistleblower lawsuits. The payments were published in a database called Dollars for Docs, which allowed anyone to look up a doctor and see if he or she received a payment.

Today, ProPublica is updating Dollars for Docs with the latest data from the federal government on all payments.

For context, there are about 1.1 million doctors in the United States.

Dr. Aaron P. Mitchell, a medical oncologist and health services researcher at Memorial Sloan Kettering Cancer Center, said his research has shown that when doctors interact more consistently with a drug company they are more likely to prescribe that company’s cancer drug. The drug industry, Mitchell said, “knows that they need to cultivate relationships over more time, so that’s what they’re really trying to do. It’s not just one drug meal. It’s consistency.”

Some Drugs Are Promoted Heavily Year After Year

Of the top 20 drugs with the most annual spending on doctors from 2014 to 2018, six made the list in each of the years: Invokana to treat type 2 diabetes, the blood thinners Xarelto and Eliquis, the antipsychotic Latuda, the immunosuppressive drug Humira and the multiple sclerosis drug Aubagio. Another three drugs were on the list for four years: Victoza to treat type 2 diabetes, psoriasis treatment Otezla and the cholesterol-lowering drug Repatha. (Research funding and royalties are not included.)

Xarelto topped the list in spending for four years, totaling more than $123 million in payments from 2014 to 2018. In March, its makers, Johnson & Johnson and Bayer AG, agreed to pay $775 million to settle about 25,000 lawsuits claiming that the companies had failed to warn patients that Xarelto could cause fatal bleeding.

In statements, J&J and Bayer have said that the allegations lacked merit and that Xarelto is safe and effective. They noted that six cases that went to trial were decided in their favor.

Many drugs on the list are in categories where there is fierce competition. For example, seven of the top 20 in 2018 treat diabetes. And in most of the drug classes on the list, “there are more than one available drug — sometimes all with the same mechanism of action — indicated for the same condition selling for very high prices,” Dr. Aaron Kesselheim, a professor of medicine at Harvard Medical School, said in an email.

According to GoodRx, a drug discount website, the average cash price of a month’s supply of diabetes drugs Invokana, Jardiance and Farxiga is more than $600.

“Promotional spending is a major way that manufacturers in these situations distinguish themselves from each other — not by conducting comparative studies or by engaging in substantial price reductions,” Kesselheim said.

ProPublica and a number of researchers have examined the types of drugs that prompt the highest payments. Ross, of Yale, and a colleague published an analysis in the British Medical Journal in 2017 that found that the “top promoted drugs were less likely than top selling and top prescribed drugs to be effective, safe, affordable, novel, and represent a genuine advance in treating a disease.”

“Our findings suggest that pharmaceutical promotion should be met with healthy skepticism,” the analysis concludes.

Prosecutors Say the Payments by Some Drug Companies Are Kickbacks, Despite the Transparency of Open Payments

There is a perception among many physicians, including some in academia, that drug company payments are fairly benign — a moonlighting gig that educates other doctors about important medications. But since ProPublica began looking at physician payments, one drugmaker after another has paid tens, or even hundreds, of millions of dollars to resolve allegations of improper, or illegal, marketing tactics.

In fact, drug company whistleblowers and federal prosecutors have said explicitly that in some cases the payments were actually bribes and kickbacks. And this behavior has continued despite tools like Dollars for Docs.

Here are some recent examples:

Spending: In 2014, the payment data shows, Insys Therapeutics spent $7.5 million promoting Subsys, a fentanyl spray for advanced cancer pain, making it one of the drugs with the most spending that year. Through 2018, the company’s total spending on the drug had reached $17.6 million.

Prosecutors say: Insys paid doctors to speak about Subsys to other physicians during “educational lunches and dinners,” according to a Justice Department press release, from August 2012 to June 2015. The meals “were actually used as a vehicle to pay bribes and kickbacks to targeted practitioners in exchange for increased Subsys prescriptions to patients and for increased dosage of those prescriptions.”

Penalty: This June, Insys agreed to plead guilty to five counts of mail fraud, pay a $2 million fine and forfeit $28 million. It also agreed to pay $195 million to settle a separate whistleblower case. At least eight company executives have now been convicted of crimes relating to the illegal marketing of the drug. Insys has said it completely restructured its operations, hired new leaders and has filed for bankruptcy protection.

Spending: From 2014 to 2018, Avanir spent nearly $22 million on its drug Nuedexta, which treats pseudobulbar affect, or uncontrollable laughing or crying.

Prosecutors say: An Avanir employee reported that one doctor at a long-term care facility, who was also a paid speaker for Nuedexta, put “entire units” of patients on Nuedexta. Another doctor at the facility, which had a number of dementia patients, routinely stopped the Nuedexta, only to have the first doctor restart it, according to a Department of Justice press release.

Penalty: In September, the company agreed to pay more than $108 million to resolve criminal and civil allegations that it paid kickbacks to doctors and marketed the drug for unapproved uses, including behaviors associated with dementia. In a statement, Avanir said it fully cooperated with investigators “and engaged in extensive remedial measures. The individuals listed in the resolution agreements are no longer Avanir employees.”

Though relationships between drug companies and doctors continue, seemingly with little change, Kesselheim, of Harvard, said that the transparency “helps bring into light an area of the field that was in the shadows.

“Now we need to figure out what to do with this.”

Charles Ornstein is a deputy managing editor at ProPublica, overseeing the Local Reporting Network, which works with local news organizations to produce accountability journalism on issues of importance to their communities. From 2008 to 2017, he was a senior reporter covering health care and the pharmaceutical industry. He then worked as a senior editor. Charles.Ornstein@propublica.org, @charlesornstein

Ryann Grochowski Jones is the data editor at ProPublica.